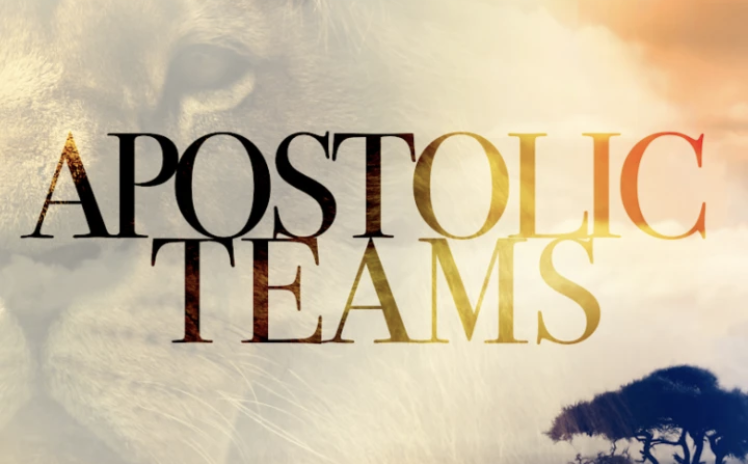 It is imperative that apostles and prophets come into their appointed positions of leadership in the Church. These are governmental gifts that have tremendous authority to execute the plans and purposes of God. In order to do this, they must be identified and released.

When apostles and prophets come into their place, the Church will experience great blessing. Individuals must begin to walk in these callings with confidence and boldness. They need to know the functions of their offices in order to execute them faithfully. Clarity and understanding of these gifts and callings will help them to walk in them fully. This includes planting, activating, imparting, and demonstrating the Kingdom of God.

These gifts need to be confirmed and strengthened. The Church will advance and experience great breakthroughs as a result of these gifts coming forth. The saints will experience a new level of perfecting, maturity and release. Fear, ignorance, and unbelief will hinder these gifts from coming forth fully. Overcome fear with courage and boldness, overcome ignorance with knowledge and revelation, and overcome unbelief with faith. Apostolic alignment is important in this hour. We must align ourselves with the apostolic and prophetic movement.

The following are 60 trends that I see emerging in the Church with the full restoration of apostles and prophets.

60 Trends that will Emerge with the Full Restoration of Apostles and Prophets:

1. A greater emphasis of the importance of signs, wonders, and miracles (especially deliverance). This will prevent the Church from depending too much on rational, intellectual ways of approaching ministry (see 2 Corinthians 12; Matthew 10). Greater demonstrations of the power of God (see 1 Corinthians 2:4).

2. A greater release of revelation and insight into the mysteries of God.Many portions of Scripture will come alive and be relevant for this end-times move (see Ephesians 3; 1 Corinthians 4).

3. Continue to expand the vision and outreach of the Church in order to break complacency, apathy, and limited vision. This includes expanding into new nations and territories. The release of a pioneering (proton) anointing (see 1 Corinthians 12:28).

5. Enforcement of Biblical standards for leadership, including elders (bishops). This will help to stem the tide of immorality and bad character in leadership. Standards concerning marriage, family, and divorce will be once again emphasized as a standard for leadership (see 1 Timothy 3).

6. Establishing the Kingdom into new regions and territories through church planting. This includes the release of apostolic, church planting teams. Raising up of Antioch churches that will have a sending and releasing mentality (see Acts 13).

7. Greater emphasis on spiritual warfare, including binding and loosing. Greater authority over territorial strongholds, including principalities and powers (see Matthew 16, 18).

8. Release of greater grace to handle increased persecution and suffering of the Church worldwide.

9. Release of greater boldness to press forward in spite of suffering, persecution, and increased opposition to the message of the Kingdom of God.

10. Release of greater resources for Kingdom advancement, including finances and human resources. Greater release of missionaries, both long-term and short-term, for the expansion of the Kingdom. This includes Kingdom businessmen and marketplace apostles (see Acts 4:34-37).

12. Releasing and maintaining an atmosphere of liberty in the churches that will be conducive for the moving of the Holy Spirit and operation of the gifts of the Spirit, including prophecy (see Acts 15:10).

13. Contending with heresy and doctrinal divisions that keep the Church separated and divided. Defending the truth and preventing apostasy from infiltrating the Church.

15. Releasing the spirit of faith in Believers and assemblies for Kingdom exploits. Apostles and prophets help us to believe for supernatural breakthroughs. As power ministers they often operate with the gift of faith and release the spirit of faith. They help destroy and overcome the spirits of doubt and unbelief that hinder the saints from operating in faith. Warning the Church against the dangers of unbelief (see Acts 13:40-41).

16. Releasing the fear of the Lord for greater reverence and respect for the things of God (see Acts 5).

19. Encouragement of individuals and churches to embrace a global vision and sending mentality (see Acts 13:47).

20. Emphasis on foundational and important truth that establishes Believers in the faith and prepares them to go to perfection (maturity). Rejection of teachings and any emphasis that are not important and do not matter. Bring redefinition to terms and doctrines that have been taught erroneously.

21. Encourage the baptism of the Holy Spirit as the doorway into the supernatural realm and Spirit-filled living. Emphasize the importance of utterance, including tongues and prophecy, along with impartation and release of these things through the laying on of hands (see Acts 2, 8, 10, 19).

22. Upgrade of churches and regions into present truth (see Acts 19).

23. Creation of new wineskins to receive the new wine that is being released from Heaven. Renewing of old wineskins, including denominational structures and churches (see Mark 2:22).

25. Helping the churches transition into new moves and patterns for ministry. Apostles are raised up during times of transition (see Joshua 1).

27. Changing and shifting spiritual climates over regions and territories, causing a new receptivity to the Gospel and the things of the Holy Spirit.

29. A greater release of angelic activity through worship to God, prayer, and utterances, including apostolic decrees and prophetic declarations (see Acts 12:5-7).

30. Redigging old wells. Reestablishment and restoration of truth that has been neglected or under-emphasized (see Genesis 26:18).

31. Greater release of judgments against immorality and sin both within the Church and society. Pronouncement of judgment upon wicked rulers, wicked governments, and wicked religious, economic and political systems (see Acts 12:23, 13:6-13).

35. Pulling down of strongholds and ideologies, including humanism, that have kept people from receiving the truth (see 2 Corinthians 10:4).

36. Greater acceleration of the purposes of God worldwide, including the fulfillment of Bible prophecies and prophetic utterances (see Jeremiah 1:12).

37. Greater manifestation of God’s glory in the Church, including the manifest presence of God and the restoration of the tabernacle of David (see Acts 15; 2 Corinthians 3:8).

40. Greater unity and cooperation between leaders and ministries in localities (see Ephesians 4:3).

41. Greater release of women and minorities into ministry and authority.Destruction of spirits of racism and sexism in the Church. Smaller nations and people groups being released into their destinies and redemptive purposes (see Acts 2).

42. Greater release of small groups through cell structure, releasing more Believers to share their gifts with the Body (see Acts 2:46).

43. Greater testimony released in the earth, including martyrdom (see Revelation 12:11).

44. Greater impact and breakthrough into Jewish and Muslim people and those who have been historically resistant to the Gospel. Historical and generational rebellion will be confronted by apostolic leaders (see Acts 7:51).

45. Greater breakthroughs into media for the promotion of the Gospel, including Hollywood.

46. Greater manifestation of demons, hardness of heart as the demonic realm reacts to the advancement of the Church and increased breakthrough (see Acts 16).

47. Restoration of proper government in the Church, including the restoration of governing presbyteries of apostles, prophets, and teachers. Challenging false government, including congregational and episcopal control (see 1 Corinthians 12:28).

48. Greater emphasis on holiness and righteousness in the Church. This will help stem the tide of worldliness and carnality (see 1 Thessalonians 4:1-7).

49. Greater impartation through the laying on of hands and prophecy. This will accelerate people into their callings and giftings (see Romans 1:11; 1 Timothy 4:14; 2 Timothy 1:6).

50. Greater unity and team ministry. This will be especially true of apostles and prophets working together to build, plant and break through. Greater understanding of these gifts will help Believers walk in them accurately and bring greater blessing to the Church. The result will be the perfecting of the saints for the work of the ministry and the edifying of the Body of Christ as all five ministries are released and work together (see Ephesians 4:11).

51. Establishment and recognition of spiritual gatekeepers and gateway churches that operate in apostolic authority in cities, regions and territories (see Lamentations 5:14).

52. Increase of knowledge and breaking of spiritual ignorance and darkness, including superstition and idolatry (see Daniel 12:4).

53. Greater breakthroughs in inner cities and areas that have been neglected and abandoned (see Isaiah 54:3).

55. Greater emphasis on outreach, street ministry, prayer walking. Greater visibility outside of the four walls of the church (see Acts 5:15).

56. Greater encouragement to sell all and forsake all for the sake of the Kingdom. More radical conversions and commitment from the saints (see Matthew 19:27).

57. Greater release of youth and children in salvation, gifts of the Spirit, and ministry (see Isaiah 44:3).

58. Greater release of apostles and prophets, and more ministers step into these callings, being inspired to move into these gifts because of others who have preceded them. The fear and unbelief that have prevented many from walking in these callings will be overcome. The restoration of these gifts means that an abundance of these gifts will be seen in the end-times Church. Multiplied thousands will come forth in different cities, regions, and nations (see Deuteronomy 1:11).

59. The Church will begin to contend for the faith that was once delivered unto the saints (see Jude 1:3).

60. Continuous revival and refreshing released to the Church (see Acts 3:19). This is a result of repentance that comes from the conviction of the Holy Spirit, and this will precede the coming of the Lord (see Acts 3:20). Restoration of all that has been spoken by the prophets (see Acts 3:21).

About John Eckhardt: Gifted with a strong apostolic call, John Eckhardt functions in the office of apostle and overseer of Crusaders Ministries located in Chicago, Illinois. He has ministered throughout the United States and overseas in more than 70 nations. Apostle Eckhardt founded the IMPACT Network (International Ministries of Prophetic and Apostolic Churches Together) as a vehicle for global apostolic reformation. His vision, as a passionate minister of the Gospel, is to see the Church become truly apostolic by developing the saints for ministry and Kingdom living through teaching, training, activation and demonstration.

He has authored more than 35 books, many having been translated into several languages. He is also founder of the Apostolic Institute of Ministry (AIM), and is part of the faculty of the Wagner Leadership Institute (WLI) and a member of the Board of Directors for the International Coalition of Apostles (ICA), both under the leadership of Dr. C. Peter Wagner. He also holds a Doctor of Ministry Degree. Apostle Eckhardt resides in the Chicago area with his lovely wife, Wanda, and their five beautiful children.